Handheld Group, a fast-growing manufacturer of rugged mobile computers, PDAs and smartphones, announced the launch of the new version of its highly popular Algiz XRW rugged notebook. The updated Algiz XRW is considerably faster than its predecessor, and has twice the amount of RAM. 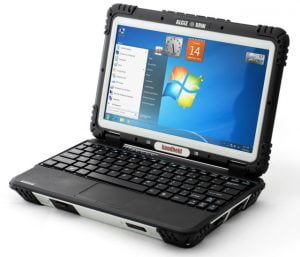 The new Algiz XRW is a slim, lightweight, compact and fully rugged notebook that delivers unprecedented performance in the field. Its 10.1-inch touchscreen display features MaxView technology, providing spectacular screen clarity and brightness in any outdoor condition, even direct sunlight. The Algiz XRW is one of the lightest and most compact rugged notebooks on the market, weighing in at a mere 1.5 kilograms, or 3.3 pounds.

“The new version of Algiz XRW is considerably faster and better-performing than earlier versions,” said Johan Hed, product manager at Handheld Group. “The new ATOM processor is very impressive — it’s powerful and almost twice as fast as its predecessors, yet energy-efficient with long battery life. In addition, we have added bigger cache and RAM memories and better graphics, and have optimized GPS performance to make the Algiz XRW the best in its class of mobile computing tools.”

The full-featured and lightweight Algiz XRW offers an array of mobile capabilities. It comes standard with Bluetooth, WLAN and GPS — features many other products add on as extras — as well as a built-in 2-megapixel autofocus camera that allows video conferencing in the field.

Its keyboard and mouse touchpad are fully sealed and illuminated by two LED lights, and it carries an IP65 rating for protection against sand, dust and water. It passes MIL-STD-810G ruggedness testing, including drop tests from 1.2 meters, and can handle extreme temperatures from -20 C to 55 C.

The new Algiz XRW has a powerful N2600 1.6 GHz Dual-Core Intel® ATOM™ processor, and it includes a 128 GB solid-state disk and 4 GB of DDR2 RAM. It runs the Microsoft Windows 7 Ultimate operating system just like any PC in an office, and is ready for Windows 8.

An optional 3G modem provides high-speed GSM/UMTS/EVDO data transmission. The Algiz XRW is ready for Gobi 3000 technology, which means it’s possible to work on any choice of wireless frequency anywhere in the world. The 57.6 Wh battery works for eight hours on a single charge.

Like the rest of Handheld’s lineup of rugged PDAs, smartphones and mobile computers, Algiz XRW is specifically developed for use in tough environments in industries such as mining, geomatics, logistics, forestry, public transportation, construction, utilities, maintenance, military and security.

The new Algiz XRW is available for order immediately, with shipments starting at the end of February 2013. The price point remains unchanged.

For full details on the Algiz XRW, click here.

We have renewed our longstanding partner status with Esri Inc. with a renewed emphasis on leveraging the power of the Esri ArcGIS Enterprise suite.  We will continue to include Esri
Events, Latest News
We are really positive about the road ahead for Compass Informatics, working with key clients and our planned new opportunities. As part of this we continue to develop our organisation
Events, Latest News

We have a brilliant team and client organisations that have been hugely supportive to our team as individuals and to the company over recent months.  To say a thank you to colleagues and friends, the Compass Informatics founding company has made a significant donation to the Mater Foundation to enable new equipment to be bought and to further build the Mater’s medical capabilities.

Events, Latest News
We use cookies to ensure that we give you the best experience on our website. If you continue to use this site we will assume that you are happy with it.Ok